Before muralists Ryan Sarfati and Eric Skotnes could create “The Journey,” an 11,000-square-foot mural on the Graduate Columbus Hotel, they had to get to the heart of a city they’d never seen. When the artists learned that Columbus is home to the second largest population of Somali immigrants in the U.S., they ran with it. The result is a lush, vibrant mural that celebrates the immigrant experience.

Sarfati and Skotnes found the call for proposals for the Graduate project through CODAworx. The site connects artists with public and private commissioned projects. When the pair made the semifinals for the competition and got a $1000 stipend for prep work, they used the money to travel to Columbus and immerse themselves in the city’s culture.

‘We wanted to experience everything’

“We thought the best way to understand Columbus was to go to Columbus…We decided to spend that money on figuring out who Columbus was, who lived there and who we were doing this for,” Sarfati said.  “It’s not fair to create public art that’s not intended for the people who are viewing it locally.”

That meant moving beyond the trendy Short North Arts District where the project was located. The artists rented scooters and took Ubers to less-traveled corners of the city. They checked out Somali cuisine and communities outside of downtown and Short North.

“We wanted to experience everything–coming from LA we’re in a bubble,” Skotnes said. “Going and visiting was definitely the seed of everything that got planted and when we got back in the studio, everything slowly evolved and the story kind of came to life.”

After their visit, plans for the mural really gelled. The artists had started with the color schemes for the two-sides of the hotel: pale blues and whites for winter and spring on one side and warm yellows and reds for summer and fall on the other.

Sarfati and Skotnes had imagined a Somali woman in a traditional guntiino garment on one side of the building. When they met Hodan Mohammed, leader of a local Somali community organization and founder of the Columbus Somali Festival, they made her the central figure on one side of the mural.

“It was very important to represent the people that I feel don’t have the upper hand,” Sarfati said. “To see themselves of that stature is empowering.”

On the flip side, the pair went for the sweeping mythological figures that are Skotnes’ claim to fame. The pair chose Atlas, the Greek god of endurance and prosperity, and Abundantia, the Roman goddess of abundance and success, to represent the immigrant experience.

“It’s a symbol of strength and courage and what it actually takes to travel across the seas or wherever you’re coming from to immigrate to somewhere else,” Skotnes said.

The artists were searching for an element to link the two sides of the mural and found it during a moment of real-life magic back in LA. The artists were designing the mural at Sarfati’s home, and Sarfati was taking a break on the balcony. He describes the moment when a hummingbird flew up a few inches from his face.

“It just kind of started talking to me, bouncing back and forth and reverberating,” Sarfati said. “I was just taking it all in, and it was pretty profound.”

The bird flew away and returned with several more hummingbirds, making a semi-circle around Sarfati. It was a magical moment that the artists wove into the mural’s stunning facade. The artists researched the migration patterns of hummingbirds, who travel from Central America and Mexico to North America every spring, often flying more than 20 miles a day on tiny wings.

“We felt like the story was a direct parallel as far as the Somali population traveling to Columbus,” Sarfati said.

After winning the design competition, the pair began the painstaking five-week process of executing the 11,000 square foot mural in the Short North Arts District. With support from the city’s public arts board, the artists added an extra layer of magic by adding augmented reality to the project. Working with animators from Augmented Island Studios based in Cali, Colombia, the artists made their mural come alive with a smartphone app.

“When this project came up, it was the perfect opportunity to fold that into this and push the muraling that we’ve been doing for years to another level” Skotnes said. “We worked hand in hand with their animators to make it come to life”

“The Journey” is a vibrant gem in Columbus’ trendy Short North Arts District. A neighborhood synonymous with gallery hops, restaurants, shops, and plenty of public art.

The district sits north of downtown Columbus and the Ohio State University campus. And has been a focus of urban revitalization efforts since the 1980s. It’s now an arts destination and a hotspot for public art. It’s home to dozens of murals, including three large-scale permanent works installed in 2019.

“Since its completion last year, ‘The Journey’ has become an iconic mural in the Short North Arts District. The installation process allowed residents, businesses and visitors to be engaged throughout its creation,” said Caitlyn Dunn, Deputy Director of District Project and Operations for the Short North Alliance.

With a budget of $150,000, “The Journey” mural on the swanky Graduate Hotel is a reflection of the city’s ongoing commitment to boosting public art.

“As a result, the neighborhood is home to some of the most exciting public artworks in Columbus, including ‘The Journey’ which is currently the tallest mural in the city. There are over 40 public artworks throughout the Short North Arts District and we hope to continue to see that number grow.”

Crossing paths and stretching out

Both Sarfati and Skotnes are California kids and children of immigrants. Sarfati’s mother is Belgian of Moroccan and Tunisian descent. Skotnes’ father emigrated from South Africa. Both got their artistic start in LA’s graffiti scene in the 1990s. Sarfati took the tag name Yanoe and Skotnes goes by Zoueh. The collaborators were part of rival graffiti crews from their early teens, leading parallel lives without intersecting.

“We knew of each other but we never really met,” Skotnes said.

The artists met four years ago and have been friends and collaborators ever since. They currently have several projects in the works on the West Coast. When Sarfati found the call for the Columbus project, he knew they had the makings of a dream team.

“We were kind of just vibing off each other and had that creative flow that allowed us to kind of go deeper into ourselves creatively,” Skotnes said. “When you’re by yourself, you can kind of get stuck, and when you bounce it off someone else, they have other ideas and it grows. When we saw this project, it was perfect because it was a double-sided hotel with so much space that it let us stretch out.”

During their five weeks in Columbus last year, the team got plenty of local press. They grew to love their temporary home. Locals recognized the artists in the paint store, and residents gathered at the hotel to meet the artists.

“I honestly feel like Columbus is a second home to us now,” Skotnes said. “Everyone was so genuine there.”

“The amount of love we received in the city was pretty substantial. We had whole families come and visit and wait for an hour to two hours just for me to come down-making me feel more welcome than I’ve ever felt at a wall,” Sarfati said. “I walked away from that experience with nothing but love in my heart.”

Imagine stepping into a photo booth and emerging to a giant three-dimensional image of your own face. The “As We Are” interactive sculpture at the…

Jennifer Bohlander’s murals kicked off the revitalization of North Topeka, known as the NOTO Arts and Entertainment District You might not think of Kansas as a hotbed… 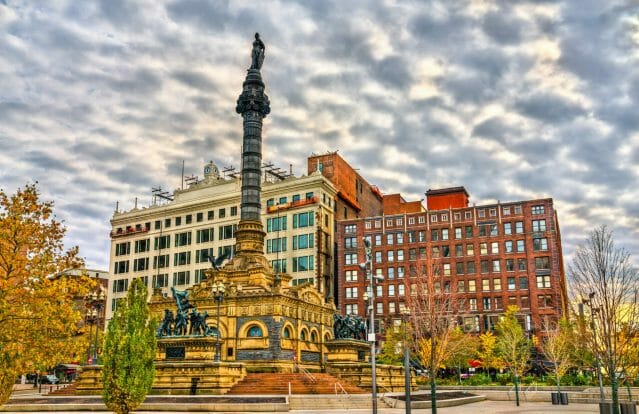