‘I knew throughout school that art was the thing I wanted to do, but just didn’t know how.’

In some ways, Thomas “Detour” Evans’ journey as an artist is like none other. His vibrant masterpieces have left their mark on billboards, in restaurants, alongside urban streetscapes and commercial buildings. He’s a star in Denver’s art scene and beyond, with nearly 70,000 followers on social media tracking his iconic work.

But in many ways, his journey is similar to countless other artists trying to make a living by doing what they love.

Detour says he always knew he wanted to pursue art as a career, but didn’t know how to actually make a living at it. So he went on to earn a master’s degree in business and took a job with an advertising agency.

“That’s what I thought you were supposed to do,” Detour said in an interview with Artistic Fuel. “But I hated it.”

A few years later, he was determined to go all in. He started creating full time, painting piece after piece. He rented studio space in Denver’s RiNo Arts District. He displayed his artwork in a friend’s restaurant. And he even put on live art performances, where he painted on stage while his friend deejayed.

“It was a ton of work. But, after about eight months, I started actually making a living for the first time.”

Now he wants to share what he’s learned throughout his journey with others. Detour recently released his book, Be the Artist: The Interactive Guide to Building a Solid Foundation for a Lasting Art Career.

We caught up with Detour to hear more about what prompted the new book and how it’s helping other creatives make the most of their talents.

Artistic Fuel: When did you realize you loved art and had a knack for it?

Detour: I always did art as a child. I was in a military family so we moved everywhere. So I sort of used art to make friends and just meet people. And after awhile, it stuck. You just really get good at something after doing it over and over and over.

It wasn’t until into high school that I started doing airbrushing. And everyone wanted T-shirts from me. I actually started selling them on Ebay. That really became a side gig for me. It was the first time I made a little bit of a living off of creating artwork. I would do a portrait or character over and over so it taught me more the pop side of the art world.

It wasn’t until I moved to Colorado that I got more into traditional stuff on canvas. I knew throughout school that art was the thing I wanted to do, but I just didn’t know how.

A|F: What was the moment when you knew you could turn art into a career?

Detour: I’d say it wasn’t until after I graduated in 2012 with my MBA. I didn’t know what to do, so I went to an ad agency because that’s what I thought I should be doing. And I hated it. I moved to Tanzania, and then when I got back I decided to give myself a year to take a break and figure out how to make a living from art.

I was lucky because I was in Denver at a time when a lot of things were happening. Businesses were coming in, marijuana was legalized, so there was just a lot of money floating around. My friend bought a huge building in RiNo Arts District. And he opened up this space to be art studios that were really affordable. Like a third of the cost of most studio space around here. My other friend opened up a restaurant where I could hang my work. And my other friend invited me to do live art on stage while he deejayed, so everything connected at the same time.

It was a ton of work. But, after about eight months, I started actually making a living for the first time. I’d say it was a year and a half after I went full time that I was making enough to not use everything on expenses.

A|F: What prompted the book, Be the Artist?

Detour: The idea came from this thing I’ve been doing on my Instagram for about four years called Art Tip Tuesday. It’s basically a post where I share information and knowledge as I’m learning. It started out as more technical, like how to blend colors and stretch a canvas. But then it got into the nuances of a full-time creative. You know, how do I network as an introvert. Or how do I talk to a gallerist? Or how do I price my work? A couple weeks ago, I did Art Tip Tuesday on scams that are going around. And a lot of people replied and said they’ve been targeted with the same scams.

So I’ve built this community of people going through the same thing. Then I wanted to create a tangible opportunity for people to learn. So one of my friends reached out to a publisher, and I told them my idea and they got excited about teaming up with me to do the book.

A|F: What do you say to artists who feel it’s nearly impossible to turn their creative passion into a viable career?

Detour: I’d say 15 to 20 years ago, it really was like that. You had a ton of gatekeepers telling you who could make it and who couldn’t make it. Galleries would tell you who’s art was worth what price. There wasn’t an opportunity to check out independent artists from around the world. But now, with social media, people are able to collect from artists around the world. They don’t have to go to a gallery or an art fare or have someone tell them what art is good or what art isn’t good.

Now there are a lot of ways that artists can make money online. You know, teaching, selling their own prints, selling T-shirts, doing tutorials on YouTube. There’s a ton of ways for artists to make it now, you just have to be willing to put in the work and really be different. The term starving artist is not applicable in today’s society because we have so many opportunities, versus five, 10, 15 years ago.

A|F: Have you heard success stories from artists following your Art Tip Tuesday posts or the book?

Detour: I get DMs every day about the Art Tip Tuesdays, from people who talk to me about why they come to my page every day to check it out. Why they love to utilize the information there.

I’ve got some really good feedback from the book. Unfortunately, it came out in February right when this coronavirus thing happened. So I haven’t gotten to do book signings or gather with people to get in-person feedback. But I’m trying to find ways to connect with people, even in other countries, who’ve bought the book…

It’s interesting, a lot of things in the book are really relevant now. I include information on how to find grant funding and artist relief funding. There are good resources out there to help fund art projects…

It’s been encouraging to have this tangible guidebook out there. I wanted this book to feel like a friend or mentor in your corner, helping you figure out where you want to go and how you can get there. That’s my hope.

Detour’s book, “Be the Artist” can be purchased at betheartistbook.com.

Creative Coach and LA artist Zach Kleyn knows firsthand the joy of creativity, by helping other artists achieve Becoming a creative coach was not Zach…

Borror’s label design work combines traditional pen and ink with trendy craft brews Mother may say that it’s what’s on the inside that counts. But… 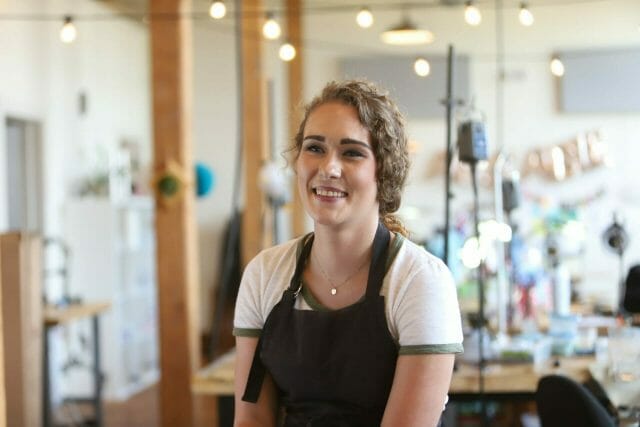 There’s a dance studio tucked in a strip mall in the suburbs of Washington, DC, where magic happens five days a week. At first glance,…