It’s not too many attorneys whose practice is driven by art. But for Ali Herischi, the fight for creative expression is one he’s been on the front lines of for most of his adult life.

Ali Herischi was born in Iran in 1977. As a young boy, he became enamored with literature, poetry and, especially, calligraphy. At 10 years old, he attended Iran’s national center for calligraphy.

“I’d read a lot of poetry, get excited about it, memorize them, compete with friends, then write them in calligraphy,” he says.

He went on to earn a degree in electrical engineering in Iran, before moving to the U.S. at 24 years old to earn his masters degree in information systems. He left his home country with a hope that he could learn more and create without restrictions.

As he got settled into his new life, he started missing his work in calligraphy. Now that he was outside of Iran, it felt like so many boundaries that once restricted his creativity had dissolved overnight.

“I started thinking about all this poetry that’s so important in Iran,” he says. “There’s all these poems about a man loving a woman. You know, love feels like being drunk or love makes them crazy. But there’s nothing about the actual woman. The woman is just in the shadow.”

So he came up with an idea. “Let’s put these words on the subject.”

He teamed up with a friend, a Lebanese woman, and wrote Persian poetry in large calligraphy over her naked body. He took photos of her in beautiful poses that purposely hide her face. Because, in a sense, she is representing all women.

The exhibit, called In Memories of Perfumed Garden, was showcased in 2004 at the Fondo Del Sol visual Art Center, Washington, DC.

“It was political in a sense. This was a real contrast to that censorship. Through this work I was trying to say, let’s put this censorship aside.”

After the Persian Garden exhibit, Herischi took a break from his artwork to focus on law school. But he held on to his passion for his home country. On his college admission form, he wrote: “I want to go to law school to contribute to the modernization of Iran.”

Before long, he found himself using art again to be a mouthpiece for justice.

He and several of his classmates at University of Maryland School of Law volunteered to help people jailed in New Orleans for minor offenses, such as failing to pay a parking fine, when Hurricane Katrina hit. More than two years later, they were still behind bars, seemingly forgotten by a legal system crippled after the hurricane.

“Their files got lost. No one knew why they were there. When they said ‘oh it was this small thing,’ no one believed their stories because there was no record,” Herischi says.

So he and his classmates helped defend and free the inmates. And Herischi took photos of each of the men and women and displayed them in a photo exhibit at the University of Maryland.

A career of advocacy

Herischi went on to become one of the most sought-after international human rights attorneys in the Washington, DC, area. He’s represented Iranian journalists, artists and authors who have been targeted by the Iranian government. Some have been jailed for their work, and others killed.

He’s currently representing the family of Iranian journalist and film critic Siamak Pourzand in a case against the Government of Iran. Herischi says Pourzand was subjected to torture, solitary confinement, forced confession, and lack of medical care that ultimately led to his death in 2011. The government went after Pourzand because he wrote articles that were critical of the Islamic regime. He managed a cultural center for writers, artists and intellectuals in Tehran just as the government began carrying out targeted killings of artists.

It’s one thing for an authoritarian government to shut down people who want to take over power in the country, he says. But it’s another thing to target citizens for simply expressing themselves through a painting, a poem, a film or a song.

“An artist isn’t trying to fight for power. Maybe they are reflecting a society or saying what they are thinking. They may be a messenger, but they don’t have any ambition of power. They just want to express themselves,” Herischi says. “When they’re targeted, that really sickens me, honestly.”

Herischi hasn’t picked up his calligraphy or even photography for sometime now. He says his days are better spent defending the rights of others to create.

“Now, my legal work is my tool,” he says. “In a 10-hour project, I can help a group apply for nonprofit status or help an artist apply for amnesty. In turn, their work is going back into society. They’re going to produce more. They’re going to do more good.”

“It’s sad that I cannot do what I do here in Iran,” he adds. “Still, I’m glad I can do something. I can give some power to these people and give a voice to the voiceless.”

There seems to be a sort of resurgence in the world of poetry recently. Something I personally love, especially because it means the exposure of…

Friday Nudge: Find poetry books that meet you where you’re at, yet transport you elsewhere I don’t mind admitting it: as a child, I didn’t… 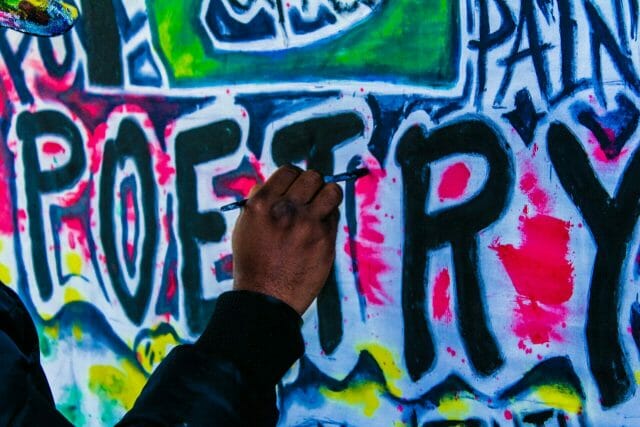 Andrea “Vocab” Sanderson doesn’t believe in accidents. San Antonio’s first African-American Poet Laureate stepped into her role this spring during a tumultuous time with a…