Chelsie Gunby never thought she would discover jewelry design. She wasn’t one of those kids who asked for paint sets or coloring books for birthdays. She preferred to be in the garage with her dad, a mechanic who tinkered on classic cars.

‘I’ve never seen another Jewelry Design company that wants to empower their employees, especially women, like they do.’

“I was definitely a daddy’s girl. I was always on his heels, working with his tools and helping him with projects. My dad was happy I was there—it was a bonding experience,” she says.

And adds with a laugh, “He did later tell me that he wanted a boy. So I kinda filled that role being in the garage with him all the time.”

At 26 years old, Chelsie is now a designer and jewelry artist at ABLE. The Nashville-based company, that once went by the name fashionABLE, does more than make and sell clothes and accessories. Their mission is to challenge the culture of the fashion industry by creating transformative economic opportunities for women.

For Chelsie, she credits the skills and the community she’s found at ABLE to turning her life around.

‘I was an IV drug user…it was an everyday, have-to-have.’

As a teen in a small east Tennessee town, that little girl who once clung close to her dad found herself in a rough group of friends. They started using drugs whenever they hung out. Just for fun. Nothing serious.

At 13 years old, she joined them. And after years of using, drugs and alcohol became less of a social thing and more of a need. “I was an IV drug user…It got to the point where it was an everyday, have-to-have,” she said.

She was in and out of treatment, and relapsed each time.

“One day my dad told me ‘I’m just waiting on a phone call to come identify your body.’

“That was the ringer. I thought, this has got to stop.”

She had two children that were previously taken away from her because of her drug abuse. Four days into her fifth round of treatment, she found out she was pregnant again.

“I wasn’t detoxed yet, but had to quit cold turkey… I didn’t want to lose this one.”

She was in jail when she interviewed with the Women’s Life Recovery Program in Nashville to begin taking steps toward recovery. While there, she was connected with ABLE.

She immediately knew this wasn’t a typical fashion company.

“What attracted me the most about being here at ABLE was their mission. I’ve never seen another company that wants to empower their employees, especially women, like they do.”

‘I continually heard…this charity is great, but…we need a job.’

Chelsie is now one of nearly 100 women employed by ABLE. The company teaches women how to make high-end clothing and other fashion accessories and, what’s more, pays them a living wage to help end the cycle of poverty.

The company’s founder, Barrett Ward, was inspired to start the company in 2010 while living in Ethiopia. With no other options to make a living, young women there, generation after generation, resorted to prostitution to support themselves and their families. Organizations came in to temporarily provide for their basic needs, but no one was thinking about how to create sustainable jobs to solve the problem long term.

“The thing I continually heard from those women was… ‘this charity is great. But when we’re done with this little process with you, we’re back on the streets. And what are we going to do about that? We need a job,’” Ward recounted on the Sounds Good podcast.

With the help of us wife, Rachel, Ward chose to focus on equipping women to provide for their families. According to UNICEF, women reinvest 80 percent of their income into their families, while men invest only 30 to 40 percent.

So Ward asked the women in that Ethiopian community what they wanted to do. They said, “let’s make scarves.”

“If they had said, ‘let’s make chairs,’ we’d be a chair company. But they said scarves,” Ward said.

Since Ward started ABLE, the company has grown from producing a single collection of hand-woven scarves to a one-stop shop for ethical fashion, offering leather goods, handmade jewelry, denim, clothing and footwear. Their employees live and work in Ethiopia, Peru, Mexico and Nashville, and 96 percent of them are women.

‘The creative mind is just a wonderful place to be. It’s a healthy place.’

Chelsie found ABLE when she was fresh out of recovery and in need of a job. She felt overwhelmed, trying to raise her 4-month-old son on her own in Nashville. She’d worked at Walmart and at various restaurants. But never with her hands, designing and creating something.

On her first day, she remembers accidentally scratching earrings when she tried to brush them with the wrong tool.

“I didn’t know if Jewelry Design was going to work out at that point,” she said with a laugh. “They taught me all these skills. It was constant learning and figuring out how to shorten the process, how to improve the process, and then seeing the finished product.”

She’s come to love designing and building jewelry. On any given day, she’ll solder earrings, necklaces and rings. Her favorite piece to make is a circle ring, a textured gold coin that sits on top of a thick, 14k gold stacker. It’s aptly named the Chelsie Ring.

“I love working with my hands and seeing a finished product. I love seeing the pieces come together,” Chelsie said. “The creative mind is just a wonderful place to be in. And it’s a healthy place.”

She’s constantly thinking about her next designs, even in her free time. One of her ideas came to her while watching the eclipse in 2017. She and her colleagues took a break from work, donned the special sunglasses and celebrated the occasion with moon pies. She came back inside to the studio with an idea.

“It just inspired me. So I started messing around with the scrap metal here and made these pieces that were inspired by the eclipse.”

She created earrings and necklaces with two round spheres, one brass and one silver, that look a little like an eclipse.

When the fashion director saw them, she decided to make it part of that year’s holiday collection. “And she told me we’re naming it the Chelsie Collection,” Chelsie said. “I was kind of shocked that it made it that far but was extremely honored that they loved them. And they’re still a part of our collection today.”

Most don’t realize how much work goes into Jewelry Design

ABLE’s business model, to care for the women making the products, has been contagious. Chelsie said people light up when they hear the stories of ABLE’s designers and artists. Some even take a minute to ask about Chelsie’s creative process.

“A lot of people don’t realize how much work goes into everything that we wear,” she said. “Each little piece takes thought and creativity, in the design process, and time and skill to make.”

For Chelsie, ABLE has become not only her job, but her creative outlet, her support system, and the women she works with have become like family. The women help each other through their lows and celebrate their highs.

Chelsie’s low came about two years after she started at ABLE. One week, she walked into a gas station during an armed robbery. The following week, her best friend and mother were murdered back in her home town. The next week, her car was stolen.

“I was in tears. I was in shock,” she said. “Coming to ABLE, they replaced my car seat, replaced my bag…and just rallied around me, trying to find another vehicle that was dependable so I could get my son to daycare. They completely supported me 100 percent.

“Coming from a small town in east Tennessee, I don’t have my family here. So ABLE has been my family.”

Each of the women who work Jewelry Design at ABLE have found a support system in their coworkers.

“We all have each other’s back. We’ve helped people move or some come out of recovery programs and don’t have anything. We always rally around to get them everything that they need whenever they need it,” Chelsie said. “We make it a point to celebrate every one’s sobriety milestones—their 6 month, their year. Even one day is a blessing and a gift that you actually have.”

She forms those bonds because she’s open to sharing her journey to recovery. It’s just one thing she can do to provide hope to others caught in addiction. 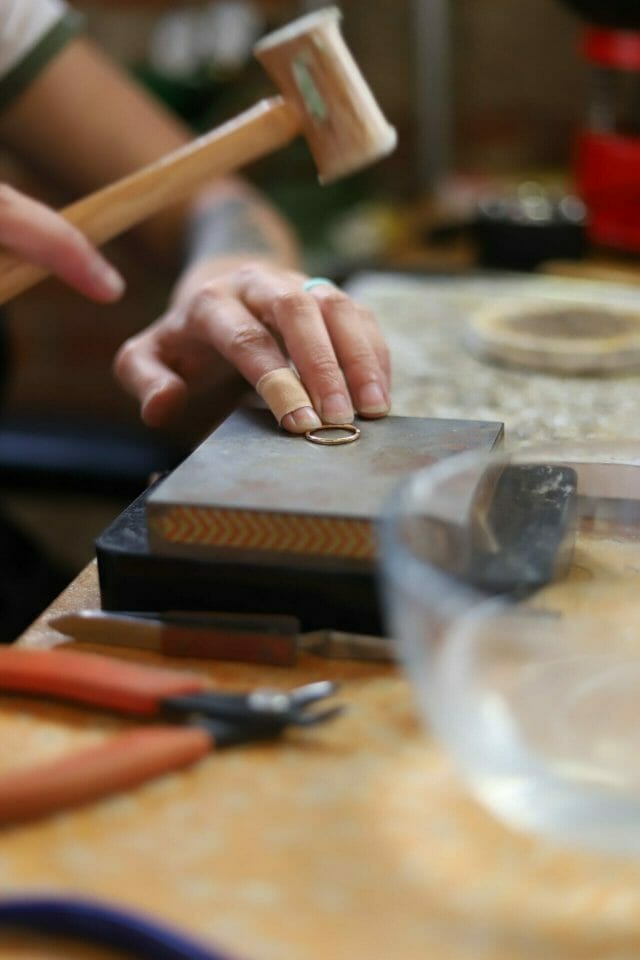 A Nashville-based fashion company is passionate about equipping women to change the trajectory of their lives and their communities.

Fashion Revolution has made it easy to be a conscious consumer Seven years ago this week, 1,134 people were killed in a Bangladesh garment factory.…

Borror’s label design work combines traditional pen and ink with trendy craft brews Mother may say that it’s what’s on the inside that counts. But…