There’s an 18-year-old custom sneaker artist in Charlotte, North Carolina, who’s caught global attention in the past few weeks. Destiny Wilson’s most recent creation is a response to the unjust killings of more black men and women, in her preferred language of art. But we’ll get to that.

The world may just now be taking notice of her work. But for Wilson, who prefers to go by her artist moniker TheArtvst, art isn’t anything new. It’s been a part of her DNA since as long as she can remember.

As a kid, she’d create wallets out of duct tape and draw on almost any surface she could get her hands on. Her drawings were so accurate that her art teacher accused her of tracing images. She went on to design the cover of her middle school’s yearbook, and later got into digital drawing.

Then at about 15 years old, she picked up an old pair of sneakers and started doodling.

“I had kind of stopped making art so I could focus on school. But when I went back into it, I decided to use shoes as my canvas,” says TheArtvst, pronounced “the artist.”

What she discovered was that people would pay — and pay a pretty penny — for customized sneakers. At first, she practiced on used shoes from Goodwill. When your canvas costs $100 or more, there’s little room for mistakes.

“So I’d practice over and over on these old shoes, until I got good enough to get people to pay for it,” TheArtvst said. “My friends were my first customers. Then I started getting messages from around the world with requests for custom sneakers.”

And no more shoes from Goodwill, she adds. “New shoes give the best results.”

Some customers want her to completely free style and others have specific requests for color and even design. She first mocks up a digital drawing of the design using the program SketchBook. Then, she gets out the paint.

“For leather shoes, I use paint specifically made for leather. And then, for canvas shoes, I add a fabric additive that actually dies the fabric,” TheArtvst said.

“I kind of wished I kept those as a display,” she says. But, she adds, they made a customer in Japan happy.

TheArtvst produced her most meaningful work yet just a couple of weeks ago. After a Minneapolis police officer killed George Floyd, TheArtvst, like much of the nation, was reeling and looking for ways to process and express her feelings.

“We’re all seeing what’s going on in the news. And we all know the saying ‘history repeats itself, so that gave me an idea.’”

She looked through newspaper archives from the Civil Rights Movement in the ’60s and compared some of the headlines to today’s headlines about the protects. They were eerily similar. She cut out the headline and body text of a 1963 Washington Post article that read “200,000 Jam Mall in Mammoth Rally in Solemn, Orderly Plea for Equality.” And she did the same with a New York Times article from June 1, 2020, titled, “Twin Crises And Surging Anger Convulse U.S.”

She used Mod Podge to glue and seal the newspaper clippings onto the Nike Swoosh. Then she painted the words “I Can’t Breathe,” across the back of the shoes. Those were the last words Eric Garner, George Floyd, and dozens of others in police holds that turned fatal.

“As an artist I needed to create something that reflects how I’m feeling during these times,” TheArtvst wrote on Instagram. “As Black people, we’ve faced and continue to face years of oppression. Systems against us that were never intended to work in our favor. We’re tired, but we won’t stop fighting.”

In an interview with Artistic Fuel, she said, “It’s disappointing that we’re still having the same issues as we were 57 years ago, but in different forms, from the police and in other ways.”

She said she feels slightly encouraged to see that black Americans are not fighting this fight alone. “Everyone around the world is watching this. I think that shows that we’re slowing making progress.”

Her Walking Through History shoes are not for sale; she’s not sure how the Mod Podge would hold up to wear and tear. But, in response to high demand, TheArtvst decided to make and sell a canvas bag adorned with a large photo of the shoes.

As passionate as TheArtvst is about customizing sneakers, it’s only one aspect of her life. She graduated from high school a year ago, not only earning her diploma but also an associate’s degree. Now she’s busy with college courses and just two years away from earning her degree in business administration. She also works at a restaurant 30 hours a week.

Demand for her sneakers has spiked in the past three months, as so many took their shopping online while in quarantine. “So that was good to see the amount of orders increase, but it’s also kind of difficult to keep up with the demand, take my online courses, and work part time.”

In the short term, she’ll continue customizing sneakers as she has time, but she also wants to expand her canvas beyond footwear. Her dream is to one day own her own business.

“I’d love to open a business that expands on my art. And maybe a second business, something outside of art.”

Until then, she says she’ll do her best to keep up with the demand for her work. And more importantly, she adds, keep enjoying creating on her own terms. She says, “Creating is my happy place.” 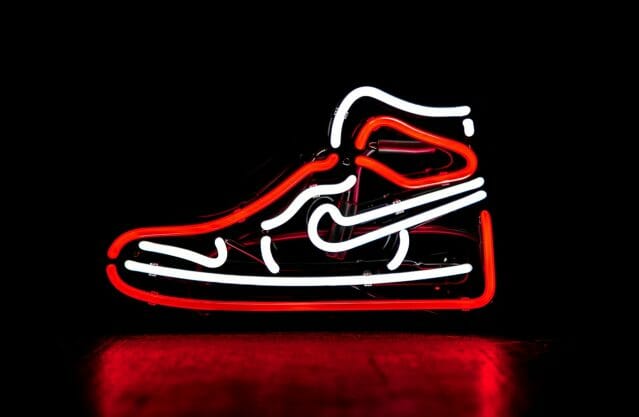 “Roads? Where we are going, we don’t need roads.” Doc Brown with his Delorean time machine When Back to the Future Part II was released…

The Nike swoosh was conceived by Portland State University student Carolyn Davidson in 1971 for a mere $35. Even accounting for inflation, that only equates…

Design your own custom Nike Dunks and make a statement with your style. With the new “by you” Nike program, you can choose from various…

A Young Artist Speaks Out With Her Custom Sneakers